NFL: Dak Prescott likely picked the wrong year to pull a leverage play on Jerry Jones and the Cowboys 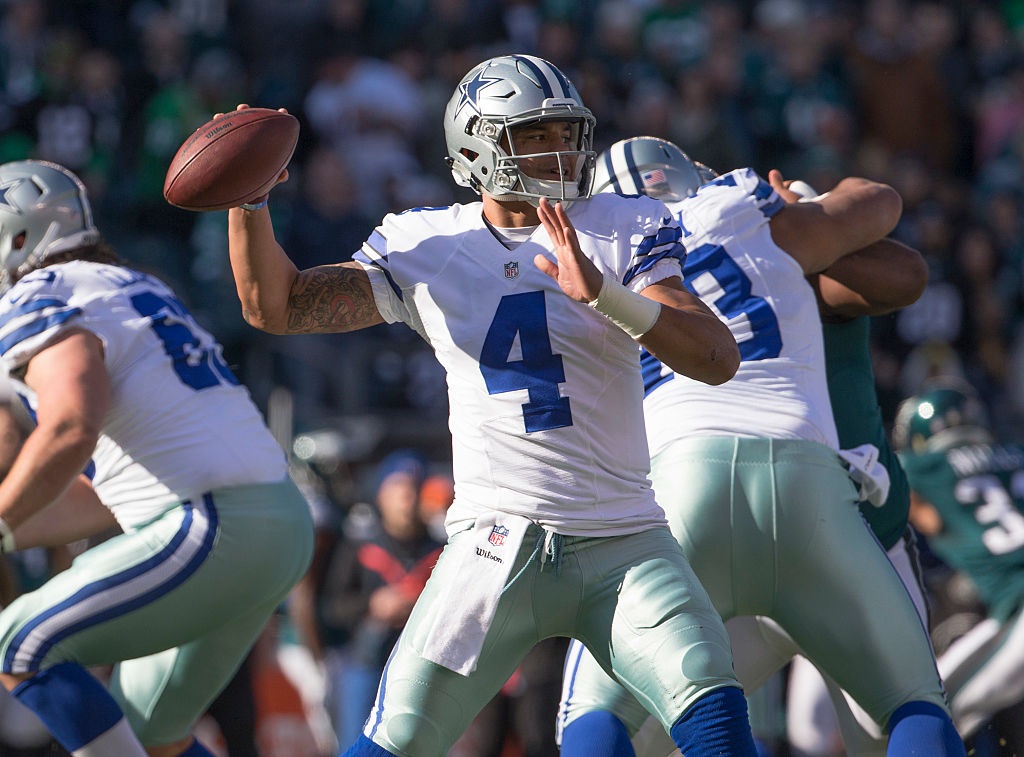 Here’s a simple, yet cold-hearted solution for Dallas Cowboys owner/general manager Jerry Jones, regarding his currently fruitless quest to sign Dak Prescott to a long-term contract.

Invest a first-round pick in a quarterback, come April.

The above statement isn’t drenched in sarcasm. It’s actually a smart leverage play for Jones, who apparently has strong reservations about paying Prescott an average salary north of $40 million per year — despite Prescott’s rock-solid career record (40-24 as a starter) and top-notch numbers from the 2019 campaign (4,902 yards passing, 33 total TDs).

Should Jones be lampooned for being so reluctant about a homegrown asset who has far exceeded the expectations of a typical fourth-round draft pick?

Absolutely. By all accounts, Prescott has been a model citizen, high-level performer and effective leader with a flagship franchise.

(The Chunky Soup people love him, too.)

Should Cowboys fans be worried about a future that might not involve Prescott beyond the 2020 season?

The Cowboys have had two linchpin quarterbacks since the 2006 season (Tony Romo, Prescott), and neither came at a draft price higher than Round 4.

There’s a lot of luck supporting the above statement.

Romo was an undrafted commodity out of Eastern Illinois in 2004, and had benefited from Drew Bledsode floundering during his final NFL campaign (2006 with Dallas) — thus making it easier for Jones and head coach Bill Parcells to endorse the midseason change at quarterback.

Even if Romo would have been viewed as a project in the early years, it’s still weird Shanahan didn’t feel compelled to spend the last of 10 draft picks from that year on a known prospect (school-wise).

The Cowboys have certainly reaped the benefits of having cost-effective quarterbacking salaries for the large chunk of this 14-year cycle (Romo eventually got paid big bucks); and Jones and Co. have likely gotten used to the art of building deep and potentially dynamic rosters, without devoting market-setting monies to starting quarterbacks.

This isn’t even a new way of thinking for Jones, either.

Remember how Jones once infamously stated that 500 head coaches could win big with the Cowboys’ roster of the early-to-mid 1990s — a not-so-subtle jab at head coach Jimmy Johnson’s public plea for a higher salary?

Bottom line: Yes, Jones puts up a big, stubborn wall when it comes to controlling salaries of certain players and coaches; but his track record of building viable rosters also supports the notion of taking a hard-line stance with Prescott.

Given these crazy-low figures, along with the quarterback’s uber-consistent play after four years as the Dallas starter, it’s easy to understand Prescott’s lack of enthusiasm toward accepting a so-called hometown discount with his next contract.

Spotrac.com, one of the gold-standard Web sites for tracking and analzying salaries for the four major sports (NFL, NBA, MLB, NHL), has Prescott slotted for a five-year, $165 million extension sometime this summer, with guaranteed monies exceeding the $100 million range.

To most observers, this would be a win-win deal for both parties, since Prescott has adjusted well to playing with tailback Ezekiel Elliott (three NFL rushing titles from 2016-18) … and yet, has only claimed one postseason victory in three tries.

However, if the reports of Prescott’s representation seeking $40 million per year are reasonably accurate, that might be a little too rich for the Cowboys, even though they’re the highest-valued franchise in American team sports — at $5.5 billion.

And therein lies the crux of the matter:

It’s comical to see Jones publicly discuss the difficulties of ‘writing out big checks’ to star players, from Prescott … all the way back to Deion Sanders in 1995 (five years, $35 million, with a then-record signing bonus of $12 million).

On a personal net worth level, Jones might have the GDP cachet of small, but productive European countries; and in a salary-cap-free world, hypothetically speaking, Jones could easily afford Prescott’s demands of $40 million per year, while having plenty left over for in-house free-agent gems, such as receiver Amari Cooper and cornerback Byron Jones.

I’m not an NFL player agent, nor do I play one on TV.

But from my perspective, it’s difficult to comprehend Prescott’s max-out leverage here, in terms of expecting the Cowboys to acquiesce to the reported demands of $40 million per year.

a) The Cowboys have enough cap room (ranked 5th in the NFL) to slap the ‘franchise’ tag on Prescott on/before March 12 (one year, $26.895 million) and still pursue a top-level quarterback, via free agency; and after that, Dallas could release Dak from the tag obligation in late March, soon after all free-agency money dried up with other teams.

b) Even if Prescott reached the open market at the same time of Brady, Tannehill, Rivers, etc. … do you really think other clubs would offer anything close to $35 million per season (over five years)?

c) From a TV-endorsements perspective, there’s no substitute for being the leader of the Cowboys during prosperous times. Even if Prescott went to big markets like Los Angeles, Chicago or New England, he’d still have difficulty improving upon his current portfolio of corporate champions.

d) Surely, the Cowboys won’t repeat the sins of the Washington Redskins from a few years ago.

During the 2015 campaign, the Redskins failed to go all-out in signing Kirk Cousins to a long-term extension, even on the heels of 4,166 yards passing, 29 touchdowns (11 INTs) and a sterling completion rate of 69.8 percent.

(Curiously, the Redskins had the great foresight to draft Kirk Cousins in the same class as the more heralded Robert Griffin III … but didn’t have enough faith to broker the long-term deal.)

This invariably led to a showdown of wills between the two parties, with the Redskins threatening to use the ‘franchise’ tag on Cousins heading into 2016 … and Cousins happily calling team officials on their bluff.

And the following winter, Cousins bolted the Redskins’ palace of incompetency for the Vikings, inking a fully guaranteed pact of three years and $84 million.

With this history lesson fresh on the minds of everyone in Cowboys Nation, why would Jerry Jones possibly give that kind of leverage to Prescott … if it were eminently avoidable?

With the 17th overall pick in the draft, the Cowboys most likely won’t have a shot at landing LSU’s Joe Burrow, Alabama’s Tua Tagovailoa or Oregon’s Justin Herbert — the consensus top three QBs of the 2020 class — minus surrendering a boatload of draft choices for doing so.

However, second-tier performers like Washington’s Jacob Eason, Utah State’s Jordan Love and Georgia’s Jake Fromm will likely be there for the taking at 17; and before you poo-poo their non-elite status, here’s a list of prominent NFL quarterbacks taken after the 16th pick in the last decade:

Speaking of Eason, have you seen this kid’s bazooka for an arm … and feather-soft touch on deep balls?

These traits alone should motivate Jones and Co. to consider drafting Eason at No. 17 overall, assuming Prescott doesn’t have a long-term contract in place by late April.

At the very least, Eason’s presence would mimimize Prescott’s leverage with holding out, or demanding market-altering money at the quarterback slot.

And for those arguing the Cowboys would be better served drafting a non-quarterback at 17, believing the club’s on the precipice of championship contention, here’s one retort:

Would you seriously doubt Jerry Jones’ capacity for building up the Cowboys’ roster over the next five years, in a scenario where the starting quarterback made less than $6 million for the vast majority of that time?

No need to answer here. History’s already on Jerrah’s side.