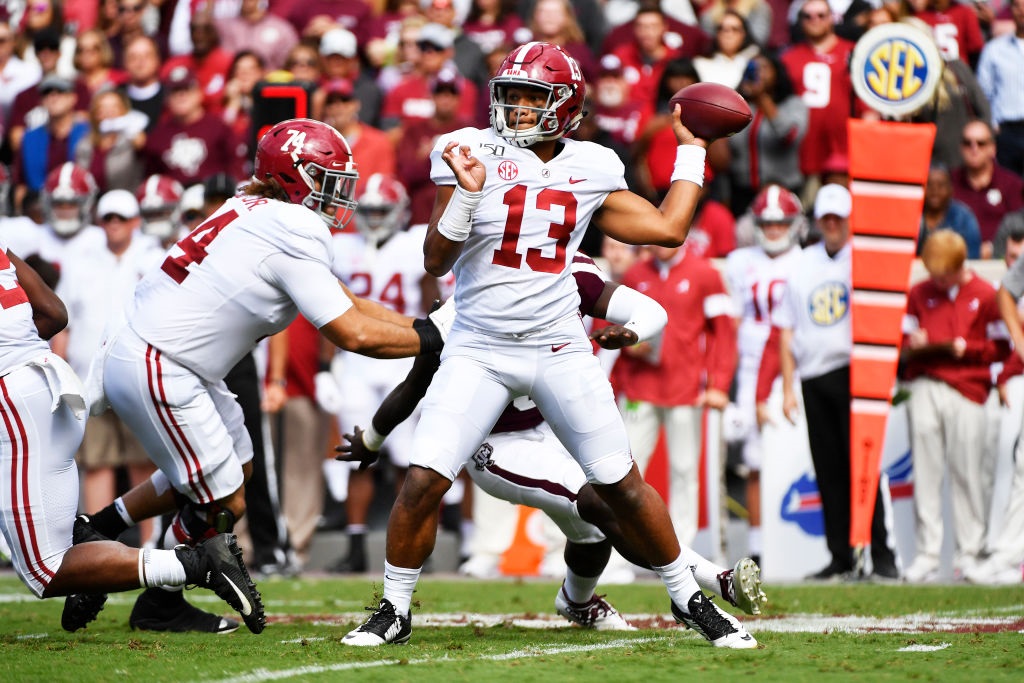 However, the weekend’s most significant event might have taken place in the bowels of Lucas Oil Stadium, or wherever clubs conducted their 15-minute interviews with select prospects.

According to The Sun-Sentinel, based in Fort Lauderdale, Fla., Tagovailoa’s camp (or whomever leaked the contents of this story) felt the Dolphins had been a little frosty with the Alabama quarterback, perhaps even giving him the ‘cold shoulder’ during the interview process.

The three takeaway quotes from the piece, supposedly attributed to Tagovailoa, as relayed by the source:

“How am I supposed to feel like it’s the right place for me if (the Dolphins) act like that?”

“Maybe they are after Justin Herbert.”

On its face, this story paints an ugly picture between the Dolphins and Tagovailoa, who might have been the Cincinnati Bengals’ preferred choice with the No. 1 overall pick, if he hadn’t suffered a hip fracture in November.

But in reality, the piece loses sight of one major point of fact, thus explaining the very reason for the Dolphins’ reported indifference toward Tua:

They’re fighting a war on two fronts, in terms of a) competing with the Dolphins, Chargers, Raiders and possibly Raiders for the Lions’ pick at No. 3 (via trade) … while also b) dealing with fresh speculation of the Redskins potentially drafting and keeping Tagovailoa with the second overall choice.

Simply put, even if the Dolphins’ triumvirate of owner Stephen M. Ross, general manager Chris Grier and head coach Brian Flores were privately coveting Tagovailoa in the draft — believing he’ll be a franchise linchpin for 12-15 years — it still wouldn’t serve their best interests to make such a proclamation in a public setting.

Or during a combine interview, knowing the contents of such a meeting could/would be leaked to the press.

BATTLE #1: WHAT WILL THE REDSKINS DO?

Since the conclusion of the College Football Playoff, it had been widely assumed the Bengals would lock into LSU quarterback Joe Burrow (an Ohio native) with the first pick, and the Redskins would follow suit with the no-brainer selection of Ohio State defensive end Chase Young at No. 2.

But during the NFL combine, some reports mucked up the above speculation, claiming the Redskins were heavily intrigued by the notion of drafting Tagovailoa at No. 2, even though Washington invested a first-round pick on quarterback Dwayne Haskins last year.

Of course, that was the old Redskins’ regime’s QB pick.

The new power couple of head coach Ron Rivera and VP of player personnel Kyle Smith should feel no loyalty to Haskins (1,365 yards passing, 7 TDs, 7 INTs in nine games), if they genuinely believe Tagovailoa has the greater upside and would be a better long-term fit.

Would this be the right move? Three semi-relatable occurrences from the last 40 years of draft history quickly come to mind:

1983 — Just one year after picking QB Art Schlichter at No. 4 in Round 1 (one slot ahead of Jim McMahon), Colts general manager Ernie Accorsi took another bite of the passing apple by selecting future Hall of Famer John Elway with the No. 1 overall choice.

History suggests it was technically the right call for the floundering Colts at that precise moment.

Unfortunately, history also reveals that Colts owner Jim Irsay would go behind Accorsi’s back five days later, quietly trading the disgruntled Elway (who refused to play for Baltimore coach Frank Kush) to the Broncos, thus missing out on Jim Kelly or Dan Marino, via trade, from this once-in-a-lifetime quarterbacking pool.

(Accorsi was OK with trading Elway to another club … provided they coughed up a boatload of first-round picks, and cleared a path for grabbing Marino in Round 1. But the Broncos gave up very little of major draft capital for Elway’s rights.)

1989 — In his first year with the Dallas Cowboys, coach Jimmy Johnson sent mixed messages to the NFL world by selecting UCLA quarterback at No. 1 overall (smart play) … and then forfeiting the next year’s top pick, as a means of acquiring Steve Walsh through the ’89 supplemental draft (confusing move).

However, over time, Aikman would prove to be the greater commodity, leading the Cowboys to three Super Bowl titles (1992-93, 1995) and attaining eventual Hall of Fame glory.

2019 — Around this time last year, yours truly brazenly took to Twitter and stated there was “zero chance” of the Cardinals selecting Kyler Murray with the No. 1 overall pick, even though new Arizona coach Kliff Kingsbury had long professed to be a fan of Murray’s skill set.

My rationale: The Cardinals’ brass had traded up in the 2018 draft for the rights to rookie QB Josh Rosen. Surely, they weren’t going to give Kingsbury full control of the franchise … just because he saw Murray up close in high school.

Instead, the Cardinals shipped Rosen to the Dolphins, and subsequently paved the way for Murray (4,286 total yards, 24 total TDs) capturing AP Offensive Rookie of the Year honors.

The lesson here, pertaining to the Redskins’ plans: Rivera and Co. are in the proverbial honeymoon stage with Washington fans. So, if they want to turn the NFL universe on its ear for draft weekend, then by all means, they should ride their guts.

Of course, bypassing Chase Young at No. 2 could also have dire consequences; so for now, let’s take the Redskins’ fascination with Tagovailoa as a stealth attempt to gauge the trade market among the Dolphins (5th overall), Chargers (6th), Panthers (7th) and Raiders (12th).

BATTLE #2: COZYING UP TO THE LIONS

At this point in the pre-draft runup, the Giants (drafted QB Daniel Jones last year) don’t possess much leverage for trading out of the No. 4 selection.

Well, teams need to find more clarity with the Redskins’ plans at No. 2 or the Lions at No. 3, before committing to trade strategies that would likely center around Oregon QB Justin Herbert or Ohio State cornerback Jeff Okudah at No. 4.

Amid this stark reality, it effectively forces the Dolphins, Chargers and Panthers to ignore the Giants and exclusively deal with the Lions’ brass, when discussing any Tua-related trades.

So for Detroit, there’s a strong chance that whomever the club covets at No. 3 (Okudah, Isaiah Simmons, Derrick Brown, Jerry Jeudy) … would also be available at 5, 6 and 7 — due to the overwhelming need for rookie quarterbacks.

Here’s the current pick allotment for each trade contender:

Bottom line: The Dolphins empirically possess the most advantageous draft capital among the teams possibly currying the Lions’ favor at No. 3.

In that sense, perhaps the Chargers, Panthers and Raiders are already waving the white flag on the Tua project.

However, if Miami satisfies its long-term needs at quarterback through free agency, it opens up an even-handed battle between Los Angeles, Lass Vegas and Carolina for Detroit’s ultimate affection.

Here are two similar packages from the past, which might serve as a model for the Lions in trade talks:

2012: The Redskins moved up to No. 2 overall, as a path for landing QB Robert Griffin III (just behind Andrew Luck).

For their generosity, the Rams swapped first-rounders in 2012 (four-slot difference), added a second-rounder for that year … and then corralled first-round selections in 2013 and 2014.

So take heart, Dolphins fans. You might eventually end up with your dream choice of franchise savior in Tagovailoa.

Just know, for this to happen, the club will have to pay a steep price … for the simple act of moving up two slots in the draft.

Bottom line: If the 2019 Dolphins hadn’t been so productive in the final weeks of the season, going 3-2 down the stretch, perhaps club officials could be more obvious about their love of Tagovailoa.

Instead, they’re obliged to play that tedious, but necessary game of Liar’s Poker, playing down Tagovailoa’s potential impact with a club … which hasn’t had a game-changing quarterback since Dan Marino’s retirement (after the 1999 campaign).