NFL SILLY SEASON: It’s easy to laugh off rumors of the Lions trading Matthew Stafford before the draft 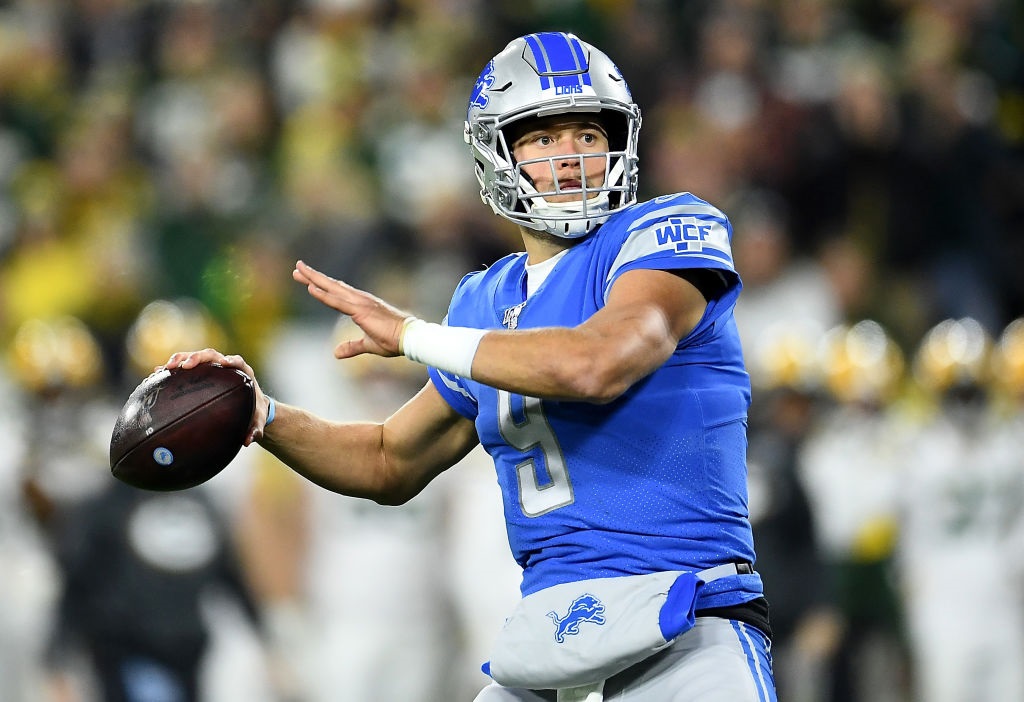 At BATSBY Sports, we don’t spend much time acknowledging anonymously sourced rumors in the NFL universe, especially during the Liar’s Poker period leading up to the draft (February-April).

However, as a Detroit native and former Lions employee, allow me to say emphatically:

The franchise has zero interest in trading quarterback Matthew Stafford within the next two months, citing five tangible and likely air-tight reasons:

I’m not a fan of NFL power brokers, such as Lions owner Martha Ford, telling their coach/GM combo that only a playoff appearance the following season can save their jobs.

On the surface, it reads like an effective threat; but it also forces the front office to perhaps cut corners with roster construction (via draft, free agency), potentially making moves which might only serve the club’s short-term needs.

As such, Quinn and Patricia cannot afford to spend the Lions’ first-round pick (No. 3 overall) on a heralded quarterback, such as Alabama’s Tua Tagoviloa or Oregon’s Justin Herbert, and still be viable contenders for a postseason berth next fall.

Given how Detroit finished in the bottom 10 for rushing and passing touchdowns allowed last season, while also ranking 26th in defensive scoring, the Lions absolutely need to nail the upcoming draft (three selections in the first 67 picks).

And make no mistake, Stafford’s presence serves as Detroit’s greatest hope for reaching the postseason in 2020. (He was a candidate for 5,000 yards passing, before incurring a midseason back injury against the Raiders.)

Without Stafford last year, the Lions dropped their final eight games, while free-falling to a 3-12-1 record.

According to Spotrac.com, the Lions currently rank 10th in available cap space ($17.79 million) for the 2020 run at free agents; but that figure would effectively vanquish (and then some), in the event of Stafford being traded in relatively short order.

In other words, even if the Quinn-Patricia tandem wanted to select Tagoviloa or Herbert in the April draft, thus signaling a new course of action for this forlorn franchise, it would still behoove the Lions to ride Stafford for one more season … while buying Tagovailoa or Herbert time to acclimate to their NFL environment.

Stafford’s dead-cap hit in 2021? By Spotrac’s estimates, it would be a more agreeable $19 million.

Of course, if Tagovailoa or Herbert are featured on Detroit’s roster in the fall … it’ll likely mean that Quinn and Patricia won’t be running the show this time next year. Makes for an easy choice come draft time.

Either through means of good accounting or smart survival mode, it’s too much of a burden to overcome in one fell swoop.

Put it all together, and this is why today’s NFL doesn’t have many blockbuster trades involving elite-level quarterbacks.

The cold, hard reality: Stafford accounts for 15.8 percent of the Lions’ salary cap … with no easy way out for at least another 12 months.

Here’s the fun part of today’s piece: With Joe Burrow and Ohio State defensive end Chase Young serving as heavy favorites to go 1-2 in the draft, the Lions subsequently possess the greatest amount of leverage for a bona fide trade on Day 1 (Thursday, April 23).

In other words, any major trade for Tagovailoa or Herbert would almost certainly go through Detroit’s purview, since the club owns the No. 3 selection and has no imminent need for a rookie quarterback taken so high.

Of that foursome, however, the Dolphins probably possess the best odds of finishing with a bottom-5 record in 2020; and by proxy, Miami would be best positioned for Trevor Lawrence, quite possibly the highest-graded quarterbacking prospect since the days of Andrew Luck (2012), Cam Newton (2011) and, of course, Stafford in 2009.

(Ohio State QB Justin Fields might merit a similarly stellar grade, in advance of the 2021 draft.)

Why should this matter to the Lions? If they’re genuinely pondering a new direction at quarterback this time next year, then why not secure another possible shot at a high-end draft pick in 2021 … through the simple act of trading down a few slots this April?

Sometime last season, Stafford became the fastest quarterback to 40,000 yards passing, a fitting achievement for the guy who was also the quickest to reach the 20,000 and 30,000-yard thresholds.

Stafford certainly has the raw numbers and record-speed capacity to garner major consideration for the Pro Football Hall of Fame someday. But there are also two major strikes against his candidacy: Overall record as a starting quarterback (currently 69-79-1) … and the noticeable lack of playoff victories (0 for 3).

Without a doubt, Stafford needs to bump the career record closer to .500; and while no one’s realistically demanding Lombardi trophies in Detroit, it would be hard to justify him making the Hall of Fame … without posting at least one postseason victory over 17-20 NFL seasons.

And that, in a nutshell, makes the whole Stafford-Detroit dynamic so vexing:

If Stafford (the team’s No. 1 drawing card) stays with the Lions for the next 7-8 years, breaking a slew of prolific passing records and earning more life-changing money, he’ll realize the rare satisfaction that comes with playing for just one NFL franchise.

On the flip side … if he passes on the chance to go elsewhere — as soon as the dead-cap hit becomes palatable — then his Canton candidacy might be a tough sell, compared to the quarterbacks with lesser passing milestones … but more team success in January.