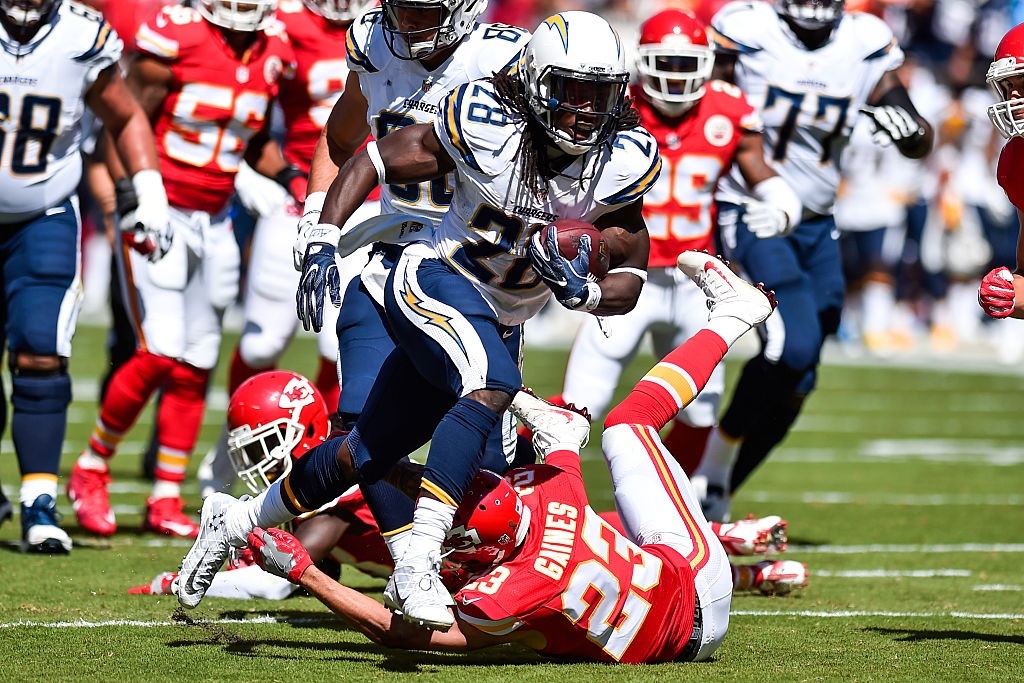 Chargers tailback Melvin Gordon has been impressive in his last four outings, averaging 21 touches, 111 total yards and 0.8 touchdowns during, all while sharing substantial field time with Austin Ekeler.

However, the time has come for Gordon to resemble an all-world back —and fantasy difference-maker — perfectly coinciding with the launch of the playoffs.

a) The Jaguars possess bottom-5 rankings with opposing tailbacks, citing the crucial categories of rushing yards and rushing TDs allowed.

b) For the season, Jacksonville rates 28th overall in rushing yards allowed (136.6 yards per game); and along those lines, opposing rushers are happily averaging 5.3 yards per carry.

c) Opposing backs have enjoyed a catch-to-target rate of 80 percent versus the Jags.

d) Charting his eight complete outings from December, Gordon reached the elite-level threshold of 100 total yards and/or one TD seven times; and for that stellar stretch, the Wisconsin alum averaged 109 total yards and 0.6 scores.

The Chiefs, Titans and Texans are the first NFL defenses to yield 100 targets to opposing tailbacks this season; and as luck would have it, the Patriots’ James White will encounter Houston and Kansas City over back-to-back weekends … coinciding with the fantasy playoffs.

And for this week, the Patriots draw a Chiefs defense which ranks 27th in receptions allowed, 29th in receiving touchdowns yielded and dead-last for targets and receiving yards surrendered.

BATSBY Sports boasts a laundry list of reasons to support Aaron Rodgers’ No. 1 ranking for Week 14, among quarterbacks:

a) The Redskins have surrendered the eighth-most passing touchdowns this year.

b) Opposing QBs have enjoyed a robust completion rate of 69.2 percent versus Washington.

e) Since 2011, Rodgers has posted three or more touchdowns in back-to-back games 13 times.

There’s a reason why the Lions possess bottom-5 tallies with catches, targets and receiving yards allowed to opposing wideouts — aside from Detroit’s woeful pass rush (27th in sacks).

And before putting that production squarely on the shoulders of every cornerback not named Darius Slay, remember Bears wideout Allen Robinson averaged seven catches, 10.5 targets, 86 yards and 0.5 scores over two recent meetings against Slay.

This all bodes well for the Vikings’ tandem of Stefon Diggs and Adam Thielen (apparently back from a hamstring injury).

Jameis Winston’s six-game streak of 300 yards passing might be over, but the Bucs quarterback remains a popular starting asset for this week’s fantasy playoffs.

**For that same stretch, Winston collected solid averages of 314 yards passing and 1.8 TDs.

**The Colts defense ranks 22nd in completions allowed to quarterbacks.

**This season, the Bucs’ elite receiving duo of Chris Godwin and Mike Evans have combined for five outings of multiple TDs.

Counter that against seven weekend games being played outside in Midwest cities like Chicago, Green Bay, Cleveland … and schizophrenic East Coast markets such as Philadelphia, Boston (Foxboro), New York and Buffalo.

In other words, why risk potentially dicey weather in colder climates, at the most nerve-racking time for fantasy football … when neither Winston, Jared Goff, Russell Wilson nor Ryan Tannehill will likely worry about wind, rain, cold and overall bluster?

PrevPreviousFANTASY FOOTBALL: Early NFL positional rankings for playoff Week 14
NextNFL: The ‘You Are Looking Live!’ preview for Week 14Next