NFL: The Daniel Jones ‘A Star Is Born’ hype in New York City is real … unless it isn’t 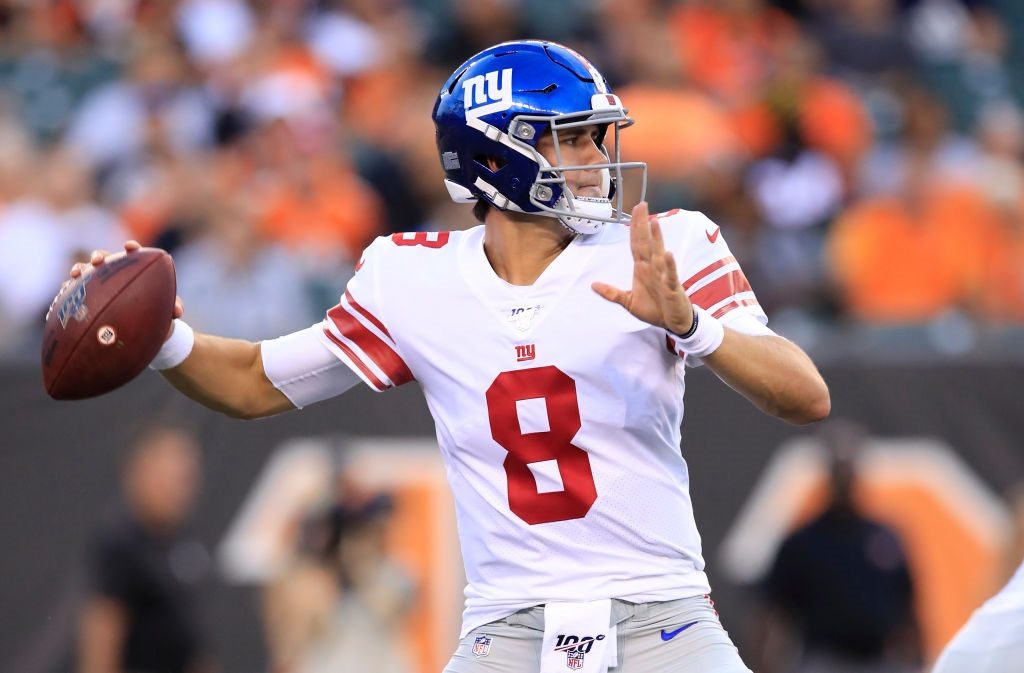 If Twitter had been around in 1981, it would have been interesting to gauge NFL Nation’s reaction to Detroit’s Eric Hipple lighting up the Chicago Bears defense for 300-plus passing yards (from only 14 completions) and six total touchdowns on Monday Night Football — which also served as the second-year quarterback’s starting professional debut.

For 38 years, Hipple’s out-of-nowhere domination of the Bears represented the gold standard of quarterback breakouts in the post-merger NFL, at least from an aggregate passing yards/passing touchdowns/rushing TDs perspective.

Sure, plenty of novice QBs have thrown for more yards (Cam Newton eclipsed the 400-yard-mark in his first two NFL starts); but for the longest time, Hipple — who might have been the prime reason why the Lions passed on Jim Kelly and Dan Marino in the 1983 draft (seriously) — didn’t have much competition in his single-game category of achievement.

That solemn existence ended on Sunday.

Not only did rookie QB Daniel Jones Hipple as the only quarterbacks of the modern era (1970-present) to pass for 300 yards and multiple passing/rushing touchdowns in their NFL starting debuts … but Jones — the No. 6 overall pick in April’s draft — also rallied the Giants from an 18-point deficit, en route to an epic 32-31 victory over the Buccaneers.

Jones’ storybook Sunday had a happy ending, due to Bucs kicker Matt Gay missing a chip-shot-range field goal of 34 yards in the final seconds.

But even if Gay’s kick had sailed through the uprights, Giants fans would still be riding high today … on the confident belief that Jones can lead the franchise to prominence for 10-15 years.

A FEW WORDS OF CAUTION

The strong-armed, fleet-footed and remarkably humble Jones seems like the ideal fit for Pat Shurmur’s offense.

But that statement can only be confirmed through time … regardless of what the national pundits are squawking about in the afterglow of Victory No. 1.

**The Bucs defense must have forgotten that Jones had nimble feet, just seconds before the quarterback scrambled for the eventual game-winning touchdown.

On the final play, Tampa Bay went all-out to defend every New York playmaker with ferocious one-on-one intensity. As a consequence, though, it left a sea of open land for Jones to roam.

Heck, even Eli Manning would have scored without incident, given the Grand Canyon-sized gap after evading the pass rush.

(Credit where it’s due: Leading up to Jones’ score on 4th and 5, the Buccaneers did a superb job of stifling the Giants playmakers, most notably tight end Evan Engram, who cruised for six catches, 113 yards and one touchdown.)

**Jones won’t have access to tailback Saquon Barkley for a few weeks, with the second-year star suffering a high ankle sprain in the first half.

For one glorious comeback, the Giants persevered without the dynamic help of Barkley; but will that trend carry over to Weeks 4, 5 and 6, once the opposing defenses can effectively game-plan for Wayne Gallman?

**The Giants defense can’t stop anyone.

And these problems won’t be subsiding, as the season takes its toll.

**The Giants draw the vulnerable Redskins next Sunday, giving Jones the chance to showcase his stuff in front of an adoring home crowd.

Actually, scratch that. If you watched at least one quarter of Giants-Bucs, you’d know the New York-focused cheers were twice as loud as the Tampa Bay cheers; and perhaps Jones fed off that ‘snowbird’ energy in friendly enemy territory.

So, there’s definitely hope for Jones carrying that sugar high of Sunday greatness into the following week.