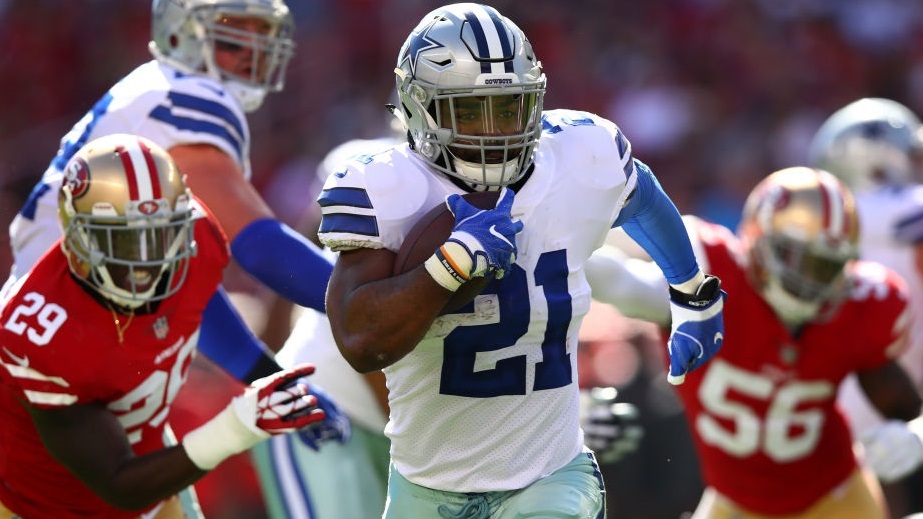 Cowboys tailback Ezekiel Elliott might have eight touchdowns on the season, but that Toucan Sam-like nose for the end zone doesn’t necessarily apply to games against non-conference competition.

Charting his last seven meetings with AFC foes, the three-time rushing champion has accounted for only two scores during this stretch. On the plus side, though, Elliott holds superb averages of 114 total yards.

Here are other Elliott-related nuggets to celebrate during Thanksgiving week:

**The Bills are allowing 4.6 yards per carry to opposing backs this season.

Only wretched weather can stop Chiefs QB Patrick Mahomes from carving up the Raiders; and by the looks of things, Missouri’s mid-week snowstorm will likely be gone ahead of Sunday’s late-afternoon kickoff window.

What makes us so sure? A few things:

For this productive stretch, the NFL’s reigning MVP has averaged 309 yards passing and 2.6 scores.

Don’t fall asleep on Bucs running back Ronald Jones being a bankable star for Weeks 13-16, the universal period for the fantasy football playoffs.

What’s more, these same backs are averaging 5.6 yards per carry versus Jacksonville.

WEEK 14 — The Colts are solid against the run; but opposing backs have enjoyed a robust catch-to-target rate of 82 percent.

As such, Detroit ranks 31st in fantasy circles against PPR backs.

WEEK 16 — The Texans own bottom-5 tallies with opposing backs, across the board, citing catches, targets, receiving yards and receiving TDs surrendered.

The last three games have been a major struggle for Aaron Rodgers, with the Packers quarterback averaging only 166 yards passing and 0.7 touchdowns.

That’s the bad news … now for the good stuff:

a) Of his last eight games played on FieldTurf (including the playoffs), Rodgers holds excellent averages of 319 yards and 2.1 touchdowns.

b) The Giants defense ranks in the bottom 10 with passing yards and passing touchdowns allowed.

PrevPreviousFANTASY FOOTBALL: Early positional rankings for NFL Week 13
NextNFL: The ‘You Are Looking Live!’ preview for Week 13Next