SUPER BOWL: Chiefs’ 50-year championship quest might have been worth the wait, thanks to Patrick Mahomes 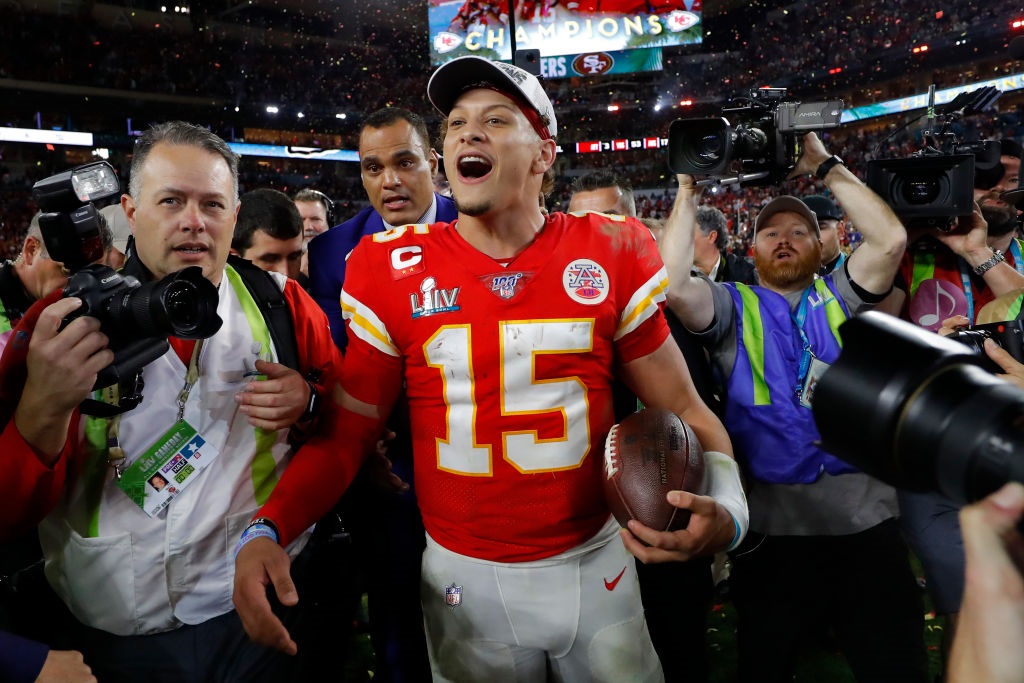 During the Divisional Playoff round, the Chiefs trailed the Texans by 24 in a flash … before Mahomes and Co. accounted for 51 of the next 58 points.

For the AFC title game, an early 10-0 deficit to the Titans bore the look of an implausible challenge for the Chiefs, given Tennessee’s power-running acumen and its season-long penchant for clamping down on the opponent, when carrying a hefty lead.

But alas, Mahomes’ slow start was merely a ruse for greater things down the road, as he collected four touchdowns (one rushing) and propelled his club to a decisive win over the Titans.

And then on Sunday, also known as Super Bowl LIV in Miami, surely Mahomes couldn’t rally his troops one last time against the vaunted 49ers, especially after tossing an ugly-looking interception with 11:57 remaining, and the Chiefs trailing by 10.

Before answering that pressing question, though, consider this:

According to ESPN’s statistical-probability model, when Mahomes took control of the ball from his own 20 with 8-plus minutes remaining, the Chiefs (down 20-10) had a win expectancy of only 5 percent; and those fleeting odds dwindled to 3.9 percent with 7:17 left on the clock … conversely meaning the 49ers — in pursuit of their first world championship since 1994 — had a 96.1-percent chance of claiming the franchise’s sixth Lombardi Trophy.

The Mahomes who had struggled mightily in the first three quarters was nowhere to be found at this point.

Instead, the 24-year-old wunderkind had surreptitiously swapped his normal Chiefs-issued garb under the uniform … for something Clark Kent (aka Superman) might have hidden under his plain clothes and horn-rimmed glasses.

A nine-yard scramble here, a short Damien Williams run there, The Comeback started so innocently.

But just one play after a pass-interference call was reversed, in the 49ers’ favor, and with the Chiefs facing a 3rd-and-15 situation at their own 35, Mahomes connected with Tyreek Hill for a 44-yard rainbow pass near the left sideline.

It was a magical play, but also out of character for the Niners defense. How did Hill — Kansas City’s fastest game-breaker — get so free on such a huge play? And without making any hard cuts when running past the San Francisco secondary?

There wasn’t much time to lament the defensive breakdown. After two Mahomes incompletions, a third-down pass to Travis Kelce would prompt a pass-interference flag from the officials, placing the ball at the 1-yard line.

And on the next play, Mahomes located Kelce in the end zone for a touchdown.

Remember those 3.9-percent odds of victory? In relatively short order, there had been a serious uptick with win probability, as the Chiefs closed the deficit to three points.

BLAST FROM THE PAST?

For those with short memories, Niners head coach Kyle Shanahan served as the Atlanta Falcons’ offensive coordinator three years ago, when the club infamously squandered a 28-3 lead to the Patriots in Super Bowl LI and subsequently lost in overtime, 34-28.

Even though Shanahan would formally accept the head-coaching gig with the 49ers a few days later, the happy culmination of a lifelong dream, he still had to answer a slew of media questions surrounding the Falcons’ inability to close in the final minutes.

More specifically, Shanahan had to reconcile why the Falcons went pass-heavy late in the fourth quarter, despite holding a once-formidable lead over the desperate Patriots?

Sunday’s game never had the feel of blowing a 25-point lead. But it’s also fair to wonder why the 49ers offense — under the direction of Shanahan — attempted more passes than runs in the second half?

On the Niners’ next drive, a 5-yard run from Raheem Mostert (60 total yards, 1 TD) on first down seemingly had San Francisco positioned for a sustained drive, perhaps long enough to drain the clock or force Kansas City to vanquish all its timeouts.

However, on second down, with the club operating out of the shotgun, QB Jimmy Garoppolo’s pass attempt to tight end George Kittle came up short; and a few seconds later, an incomplete attempt to Kendrick Bourne had quickly ended a possession that needed to have legs — or at least more running calls (maintaining a running clock).

PRELUDE TO A CHAMPIONSHIP

For three-plus quarters, Mahomes hadn’t enjoyed much success against the ball-hawking, missile-seeking Niners defense, often failing to hit receivers in stride, short-arming balls or even telegraphing passes that were easily knocked down or intercepted.

But those fleeting moments merely served as character-builders on the Chiefs’ go-ahead scoring drive.

Similar to the previous stanza, Mahomes started things with a conservative tone, finding Hill for five yards, locating Kelce for nine yards and then connecting with Hill for a 3-yard pass that was easily snuffed out by All-Pro cornerback Richard Sherman.

Was this sequence an intentional setup for what happened next?

On the following play, with the Chiefs at the Niners’ 48 and 3:44 left on the clock, Mahomes lofted a picture-perfect pass — just beyond the potential reach of Sherman — to Sammy Watkins for 38 yards down the right sideline.

At that point, the mostly pro-Chiefs crowd at Hard Rock Stadium had suddenly whipped into a frenzy, believing that fate might be on their side … after being sidelined from Super Bowl history for the last 50 years.

Mahomes would certainly feed into that new-found feeling of invincibility. With 2:44 left, he tossed a short completion to the tailback Williams, who had just enough speed, shake and wiggle to find the end zone on the dive.

Officially, the Chiefs wrapped up this harrowing Super Bowl victory with Williams’ 38-yard touchdown run with 1:12 on the clock, boosting the club’s lead to 31-20.

But the final result had been ostensibly determined on the Niners’ previous drive, needing 85 yards for a go-ahead touchdown.

A long run from Mostert (17 yards), a short pass to Kittle and mid-range connection to Bourne (16 yards) had quickly moved the Niners into Chiefs territory.

However, the offense still had plenty of work ahead, since field-goal attempts had no significance in the waning seconds.

The first two ensuing downs were fruitless, with Garoppolo failing to hit Deebo Samuel or the aforementioned Bourne with mid-range passes.

On third down, though, Shanahan took a different tack with the play-calling. With the Chiefs seemingly expecting another mid-level toss, the speedy Emmanuel Sanders had miraculously gotten behind the defense on a long ‘post’ route.

If Garoppolo had thrown a perfect strike on this rainbow attempt, perhaps the story of the 49ers’ worst-to-first season would have the happiest of endings. Instead, the errant throw of maybe two extra yards served as San Francisco’s last and best shot at Lombardi Trophy glory.

On their final play of relevance, Garoppolo was sacked by Chiefs defensive lineman Frank Clark, a humbling end to a Super Sunday which began with so much promise.

You know the old line of how ‘Tomorrow is a promise to no man (or woman)‘?

Well, that may be the case, from an existential standpoint.

But in the very-near future, we can confidently promise that Mahomes — the youngest NFL MVP (2018 season … at age 23), the youngest Super Bowl MVP in league history (24 years old) and the first quarterback to execute three double-digit-point comebacks during a single postseason — can start dreaming about a market-setting contract extension in the next few months.

At the very least, Mahomes will always be the Kansas/Missouri conquering hero … who arrived just under the half-century cutoff mark.

PrevPreviousNFL and BATSBY SPORTS: Our smartphone-friendly cheat sheet for Super Bowl LIV
NextMLB: Good luck catching the Dodgers in the NL pennant race, in lieu of their mega-trade for Mookie BettsNext