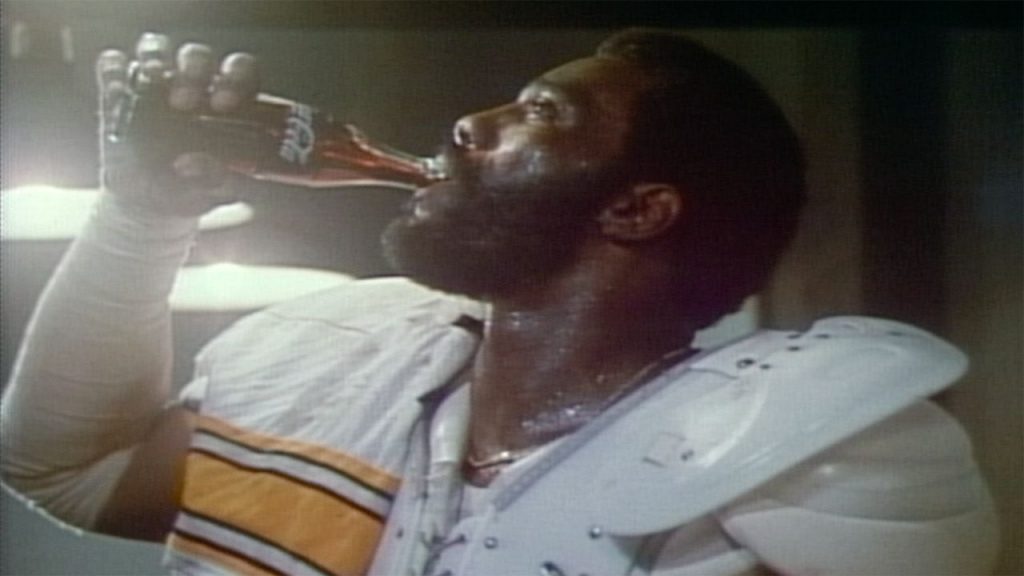 BATSBY Sports goes deep into the archives to identify and celebrate the most iconic TV spots from Super Sunday (presented in descending order), a 54-year tradition so irreverent, so popular and so powerful … that most consumers invoke their bathroom breaks during the in-game action.

As such, it might even be the first beer commercial to debut on Super Sunday (details are sketchy).

Can you believe it? It took beer companies two or three years to warm up to the power of advertising during the Super Bowl, even though the TV ratings incurred a sizable bump (14 points) from SB1 to SB2.

IBM and Apple were at the forefront of the Personal Computer battle during the late 1970s/early 80s; and IBM relied on Charlie Chaplin (played by accomplished mime Billy Scudder) to introduce its major innovations to large audiences.

This 1996 spot, starring the famous Budweiser Clydesdale horses, has good action and a killer closing line from one of the ranchers.

We also want to credit Budweiser for quickly embracing the NFL’s acceptance of the two-point conversion, which was instituted in 1994.

For what it’s worth, a Super Bowl has yet to be decided on a go-ahead, two-point conversion in the final seconds.

Namath owned Madison Avenue during the 1970s, and we’re not just talking about core staples like cars, clothing, soft drinks and footwear.

Namath was a true trailblazer, in terms of pitching products that were traditionally marketed toward women.

Look no further than this innuendo-rich TV spot with then-unknown Farrah Fawcett … who was still three years away from producing one of the best-selling posters of all time.

This superstar collaboration would serve as a terrific tease for the 1992 Summer Olympics, marking USA Basketball’s first implementation of professional players with international competition.

Jordan and Bird enjoyed starring roles on that Dream Team … but they might have garnered more sustained fame from this McDonald’s commercial, which launched the popular humble-brag catchphrase of Nothing But Net.

You can never go wrong with perpetually optimistic children … bringing humor and vulnerability to the reigning dark lord of American cinema, Darth Vader.

This 2011 spot checks all the boxes for advertisers and Super Bowl consumers.

So simple, and yet so entertaining.

Personally speaking, to this day, I can’t order sushi off a menu without muttering, “Wuh-saa-bee.”

Thankfully, most American office spaces feature a wide-open design, including the modern-day cubicles.

Otherwise, the employees might be walking on eggshells whenever turning corners, as a means of avoiding confrontations with Terry Tate, Office Linebacker.

As this 2003 ad demonstrates, Mr. Tate can be rather sticky about playing solitaire on company time … or being the last person to hit a coffee pot, but not produce fresh brew for the office crew.

You kill the joe … you make some mo’!

Creative tension inside an organization can sometimes be a good thing.

Just ask the George Steinbrenner-led Yankees of the late 1970s, or the Jimmy Johnson/Jerry Jones-fueled Dallas Cowboys of the early 1990s.

Or maybe even ask the ‘Tastes Great, Less Filling’ ad geniuses who conceived the every-man Miller Lite spots – featuring retired athletes, coaches and celebrities – of the 1970s and 80s.

The Bud Bowl series of ads touched on that genre of fostering competition, through stunning visuals (for 1989, at least), hilarious puns, celebrity voice-overs (yes, that’s Bob Costas in Bud Bowl I) and tremendous storylines for the ultimate beer game within a game.

In 1940, three movies for all time – Gone With The Wind … Mr. Smith Goes To Washington … The Wizard Of Oz – were up for ‘Best Picture’ consideration in the same Oscars cycle.

In other words, if ‘Wizard’ or ‘Mr. Smith’ had been released in any other year during that period, these classic films would have produced a truckload of Academy Awards.

The above analogy holds true for the ‘Where’s The Beef?’ campaign. If Wendy’s had waited another year to release this whimsical, yet forceful TV spot, it might have walked away with every Clio award imaginable.

(Think the Oscars for the advertising community.)

Instead, that honor went to the No. 1 Super Bowl commercial of this countdown (skip to the bottom at your own peril).

On the plus side, presidential candidate Walter Mondale landed a Reagan-like zinger on presidential hopeful Gary Hart during the 1984 Democratic primaries, using the ‘Where’s The Beef?’ catchphrase as a clever means of mocking the Colorado senator’s policies.

Who knew that frogs could read?

Also, who knew Budweiser could score major pop-culture points by simply putting three frogs on separate lily pads … without the imagery assistance of a single can, bottle or even keg of beer?

This might have been the first Super Bowl spot (circa 1971) to garner worldwide attention, which is good … since the ambitious ad wizards at Coca-Cola were shooting for world peace.

It’s a simple, elegant message for the masses. It also reinforced the notion that, much like The Sound Of Music, you can never go wrong with singing happily on a hilltop in Europe.

If Crawford hadn’t yet reached ‘supermodel’ status by Jan. 26, 1992, this ad for Pepsi likely sealed the deal.

Which brings us to this: The “Just One Look” song, written by Doris Troy, has been covered seven times in the last 50-plus years; but in every version, only one name (and one image) comes to mind:

Cindy Crawford drinking Pepsi out of a new, slick can.

The creator of this simple, yet brilliant spot from 1980 might have been laughed out of the room, after initially pitching the spot to Coca-Cola executives.

Joe Greene limping down a corridor, while setting a land-speed record for Coke consumption? Really?

Well, this commercial did wonders for all parties involved: Greene’s Q rating got a major bump overnight. The Steelers captured their fourth Lombardi Trophy of the 1970s (beating the Rams) later that day; and child actor Tommy Okon landed the biggest break of his career.

Say hello to the Super Bowl commercial that changed everything, in terms of relying on big ideas and bloated budgets to pitch products.

In the aftermath, Apple sold a millions of Macintosh computers and became a globally recognized brand.

PrevPreviousNFL: The final chapter of Philip Rivers’ playoff legacy has yet to be written, even if he’s no longer with the Chargers
NextSUPER SUNDAY TRIVIA: Tom Brady, Terrell Davis, Joe Namath headline the uber-fun facts for Super Bowl LIVNext